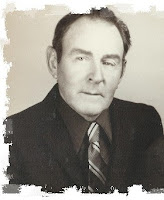 I didn’t have many Father’s Days with my dad. I remember wishing him happy Father’s Day a few times, but I can’t recall any gifts I gave him except for one. In grade school one year they brought in a wood burning kit and let us make designs on pieces of treated wood. I did a Father’s Day and a Mother’s Day piece. I have no idea where they are now. I can only vaguely remember them at all. I was probably 10 or 11. A couple of years later and my dad would be dead.

When my mom remarried many years later to a wonderful man named Ray, who was much like my father in many ways, I was already in my mid-twenties. I never knew quite how to refer to Ray. I didn’t think of him as my step-father, because I was already several years out of the house by then. I came to love and respect him, and I often actually called him on Father’s Day to wish him a good day. But I never really knew what to say. And, of course, many times on that day I was a little bit closed off inside because I missed my own father.

Then I had my son, Josh, and Father’s Day became a joyful time to me again. I still have many of the gifts he’s given me on prominent display in my office or around the house, some alien figurines, a porcelain skull, some of his sketches, a clock he made for me one year.

On Father’s Day this year my son will be coming up to see me. He’s 23, so I made it 10 years longer for him than my father was able to make it for me. I will be spending the day with him so I won’t be blogging. Tomorrow, I’m going to the grocery with Lana and we’re going to see if we can pick up some sushi grade tuna and salmon, and if we can then on Sunday Josh and I will steam that over the stove and eat it fresh and nearly raw over a bed of sticky rice and soy sauce. If not, I will go and get some sushi and bring it home. And we will have it with some cold Abita beer.

Posted by Charles Gramlich at 12:35 AM

i wish you a peaceful and happy reunion! fathers' day is not celebrated here, and i liked to read these honest lines about your feelings.

I know where you're coming from. I don't have a great relationship with my father-- his choice actually. But I have a very lovely father-in-law and a wonderful husband who is an awesome dad to my kids. I spoil my husband rotten on Father's Day because I'm so grateful to have him. That's how I find meaning in the day and it works for me.

All the best Charles-have a happy Fathers Day. It is a special day for family.
My kids are already giving me a bunch of presents (their art) I'll post that soon.

Have a happy day! And for me? not sons of moine. but i remember flood the hands of my dad with really bad drawings! ;)

I wish for you everything in reality your heart has expressed in these words Charles.

Yep, my Dad was my hero, and I remember making him a lot of goofy stuff he must have gotten a laugh from. There was a craze back in the fifties with windup joke gadgets like clowns beating cymbals together and such. I saved up and got him a hula dancer for the top of his bar one year. He loved it but I sure got the fish eye from my Mom who probably wondered where a nine year old came up with that idea. :)

I still have all the keychains and number one Dad paraphernalia my own kids gifted me, along with all their pictures and crafts. Have a great Father's Day, my friend. :)

SQT, its a lot of fun to be a dad. For me it was. I still love to be in that role when my son comes up. I'm glad to hear your husband is a great father. They are important.

David J. West, I've got a file around here with a bunch of that kind of stuff in it too, from when Josh was little.

Deka, I'm sure your dad thought they were amazing. And maybe they were. :)

Mark, thanks. I appreciate that.

Bernardl, thanks, and you too. I still drink out of my world's greatest dad mug.

(2) I can't imagine losing a father during the early-teens. That had to be rough.

(3) I'm thinking too that one might be loyal to his biological father if he indeed remembers him. Hence, there is a reluctance to call him "dad" or think of him as such, no matter how great a guy he is.

(4) It really is great to see that because of your son, Father's Day isn't only a day to remember what's lost, but also what is found.

Enjoy the day with your son, Charles. And hope you find your sushi fixings.

Hey, that's a good-looking boy you got there. You must know how to raise them right. :-)

Hope you had a good Fathers Day.

Now I've got to go call my dad.

thx, charles... this is year three since my dad died

once i became a dad nearly 30 years ago, he mellowed out and we made up for the rough years, becoming best buds...

blessings to you and yours, fellow father!

X. Dell, the best thing is to have my son now and look so forward to seeing him tomorrow. Thanks for the good words, man.

Alex J. Cavanaugh, we just got back from the store and we found what I wanted! :)

Ty Johnston, he seems to have turned out pretty good. :)

laughingwolf, and to you man. I'm glad you and your father got to make up some lost time.

Don, thanks, man. I appreciate that.

Charles, I've known you for 10 years now and you're a great father. Josh is fortunate to have you for a dad. You're also a good role model for him on how to be a father.

I have few good memories of my own father, who died when I was 18. He didn't have a good relationship with any of his children because of his alcoholism. He died at 46, a sad waste of a life. He was a very intelligent and talented man who forfeited the good things in life because of his drinking.

I miss my Dad, the last father's day that we had was 1984,August 14 of'84 he died.I never had childrem. I hope that you have a fantanstic day with your son.

Deka Black, I always smiled too, and it was because the gifts brought me genuine joy, just knowing my boy was thinking of me.

Sphinx Ink, although I believe people should have as many freedoms as they can in this life, alcohol has been an evil for many. It does incredible harm and I wouldn't be sad to see it go.

Carole, thank you. Will do.

Mike Golch, I'm sorry for your loss, man. My father died in April and every April I still think about him.

Well, I'm sitting in a coffee shop in Kota Bharu, Malaysia on Father's Day morning and got an IM saying "happy Father's Day" Have a nice day, Charles. I'm mostly posting at "riding rails" instead of Sagecoveredhills" these days

I'm glad you've found a way to celebrate it again, hon. Unfortunately, after having lost my dad in the late 70s, it's not even a part of my thought process anymore. I should be thinking of you now, though. Happy Father's Day, for all of the years I've forgotten.

Jeff, you world traveler you. Modern technology is a hoot almost wherever you are.

Lana, no reason you should think of it. Father's day is for those who raised you

Charles, You and Josh have your great day, as it's meant to be. I love the pic!

Best wishes for you this day.

Fatherhood and myself are complicated, issue-ridden things, but I do remember where I came from so to speak, and I know one day I'll miss my dad.

I have the father inlaw stuff too.

Hope you and Lana are well.

Yesterday was my first Father' Day without a father. Very sad indeed. Glad you had a good one--and sushi can make any day sparkle.

I hope you and Josh had a wonderful day!!

jodi, Lana asked us to point at something in the pic, we were having fun.

eric1313, thanks, man. Yes, Lana and I are good. Life is often complicated but over time it seems to get simpler.

pattinase, I'm sorry, Patti. it's very hard. My thoughts are with you.

Heather, we did indeed. Was great to see him.

We spent ours kayaking and hiking with our girls. Amazingly, everybody got along. My husband said it was the best Father's Day gift he's ever had.

A fine tribute to your dad, your stepdad, and your son. Hope your day was everything you could wish for.

Erik Donald France, it did. It turned our really great.

Mary Witzl,excellent. So glad to hear it.

Travis Cody, it was very good. I'm still feeling good from it today.

Hope you had a good Father's Day, Charles. That was very touching, although I'm glad I didn't read it on father's day because I was missing my own dad. Still.

What a great tribute to your father Charles.

Candy, I still miss my dad, even when I am enjoying time with Josh. But it feels right somehow, that life's cycle has continued.

Richard, thanks. I'm about a quarter way through Apostle Rising. Enjoying very much.

This is a wonderful post! And memories that you make are so precious. I hope you had a wonderful father's day.

Belated Happy Father's Day, Charles! A wonderful post, one I relate to well.

I hope you had a great Father's Day!

this is lovely, Charles


All the Best to your clan

Ello, thank you. We did, for sure.

The Golden Eagle, we did, had a lot of fun.

Cloudia, I appreciate that.

Rachel V. Olivier, I did!

I'm playing catch-up with my blog reading. Very nice post and very handsome young man. Can't help but wonder what you guys are pointing at? :)

Jess, Lana asked us to point at something for the pic so we both pointed at her. :)