News of the Day 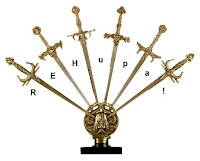 Well I received a nice bit of recognition over on The Rising Blogger. My post "A Dream of Fire" was named "Post of the Day." That's pretty cool. Seems like a lot of folks liked that piece, and all I had to do to get it was have a sleep. I like working that way.

In other news of the day I have on hand four anthologies now with works from my fellow bloggers. The first one I got was Weirdly with Bernita Harris's wonderful story “Stonechild” in it. The other three are listed below. So far I’ve just read the stories of my blogleagues.

1. Black Sails: Tales of Pirate Fantasy, which contains a story by David Hardy called "Black Curse of the Noose." Dave is a fellow REHupan, and his blog is called "Fire and Sword" and is linked to this blog through my link to REHupa. Dave’s tale involves a curse, as you might guess from the title, and follows an old pirate who tells a tale of woe. All I can say is, be careful what you fear.

2. Werewolves: Dead Moon Rising, which contains a tale called “The Beast of Bava Pass” by Christopher Mills of Atomic Pulp fame. Christopher’s story is full of atmosphere and some neat twists. The action is deftly handled.

3. High Seas Cthulhu, which contains stories by several of our fellow blog travelers. Stewart Sternberg has a story here called “The Others.” There are many interesting elements in this story, which I don’t want to give away. I might describe it as Long Black Schooner meets Nightmare on Elm Street meets “The Shadow over Innsmouth.” I really found the main character here, one Avery Tressler, interesting and wouldn’t mind seeing more about him. This collection also contains “The Bedlamite” by Ferrel Moore. I love this title, and the tale lives up to it. A nice mixture of realism and fantasy in a Cthulhu Mythos world. There is also a tale by blogleague William Jones, who edited the book. The tale is “Depth of Darkness,” and involves an ancient stone dredged from the bottom of the sea. This piece is really nicely written with plenty of shivery elements.

High Seas Cthulhu actually contains stories by a bunch of other folks I know or know of. Lee Clark Zumpe, Darrell Schweitzer, Stephen Mark Rainey, C. J. Henderson all have stories here. The biggest name is Alan Dean foster. And in a twist of interesting fate, since I started reading this collection last night, Gerard Houarner has a story here called “The Stars, In Their Dreaming.” Why is this a twist of fate you ask? Because Gerard Houarner was the name signed to that rejection note I mentioned yesterday for the story “Love in the Time of Cybersex.” His story is quite good and reminded me a bit of “The Narrative of Arthur Gordon Pym.” Small world, ain’t it.
Posted by Charles Gramlich at 11:10 AM

Congratulations again Charles. It was definitely a dream that most of us couldn't have imagined when awake! Nice post with a nod to the blogleagues (I love that term). I've got Weirdly too and loved Bernita's story.

I am probably hearing more than the band is playing,like any romantic, but your "A Dream of Fire" blog was strangly prescient, especially with the current situation in Pakistan.
But then friends used to tell me, "You watch a hockey game and you see something else altogether."

Congrats on the Rising Blogger award. I love the picture you have at the top of this post.

Congrats on the blog award, Charles. Black Sails sounds like a neat anthology.

I too have been doing a bit of reading on the works of my fellow bloggers.

Lisa, thanks. Yes, Bernita's tale was top notch. I didn't say more about it today because I reviewed it pretty extensively before.

Ivan, there are synchronicities everywhere, my friend. But they can drive you crazy.

Travis, my only problem is finding time to read everything I want to read.

Greg, if you like pirates matey then it's a collection for you. Arrghh.

Travis Erwin, I find we've got quite a bit of talent here in our corner of the blogosphere.

Erik, hard to believe how fast the year has passed.

Congratulations on the award for your dream post. How cool that someone singled that post out as something special of the thousands that must have gone up that day.

Congratulations with the Rising Blogger award. I know several recipients. of this. It's actually a good one to have, as they link you up at their site and direct more traffic your way.

Sounds like you have plenty of good reading material to keep you busy with. The Cthulhu collection sounds especially interesting. As a reader of such fare and a gamer, the Cthulhu mythos are really interesting to follow.

Congratulations Charles but if you had just followed my simple instructions earlier about a grading scheme you'd have had all the time in the world to read. FFFFFC-FFFFFF see grading complete in less than thirty seconds.

Peace and good swordsmanship in the coming 4 equinoxes

Congratulations Charles on the blog title and Have a Happy New Year to you all!

Shauna, yeah, it was very nice.

Eric1313, there's also a book from these folks called Frontier Cthulhu but I haven't seen it yet. the High seas collection is pretty good, what I've read so far.

Mark, but can you imagine the post grading trauma I'd had to deal with? I had one student upset because I gave him a "B".

Szelsofa, thanks, and happy new year to you.

Happy New Year to you both, and wish you much prosperous blogging and writing in the months to come...my grateful thanks for all the input and inspiration of the past couple of months.

Inside our hands, outside our hearts said...

How blessed you are and you deserve it. You have a kind heart there and that is rare these days. So many self-centered things going on I wish you more success dear, so much more.

Congratulation, Charles--and everyone! Just dropped by to say Happy New Year to you and Lana. Good people.

Congratulations! I hope this new year brings tons of happiness and lots of publications!

And on the first dawn of the new year, he did rest.


May it have been a productive one, sir.

lol. We need a big gold star for your blog! You always write on such insightful notions. I'm hoping to get a publication this year. 2008 WOOOOOT! Hope you are having a super start on your New Year. Looks like you've got some great news for the day!

Julie, and to you and yours.

Middle Ditch, and to you as well. And thanks.

Donnetta, and to you, my friend.

Michelle, I'm looking forward to a productive new year. Best wishes to you as well.

Moonrat, and to you.

Congrats on the award, Charles, and Happy new Year.

Oh, and thanks for the kind comments about my story!

I hate the Lions. That's what I meant.

Starting at 6 and 2? No problem--they will rarely ever blow a chance at backing their butts out of the playoffs. There's an expression... I believe it's snatching defeat from the jaws of victory.

They're the masters of that. It's the Ford family game plan.

Who deserves it more? None, say I. Good on ya, Charles.

And thank you. Again.
I continue to be humbly astonished that you liked Stone Child.
It means so much to me from a writer of your calibre.

Christopher, no problem. The story was quite enjoyable.

Eric1313, I would feel sorry for you, eric, if it weren't that I'm a fan of the "Saints." Not bad last year, but traditionally one of the worst teams in football.

Bernita, you flatter my caliber.

Really interesting post, Charles. You answered my question unequivocally--do people find inspiration in dreams. The detail is astounding. Thanks for the heads-up on where to find it.