Do You Hear That Roar 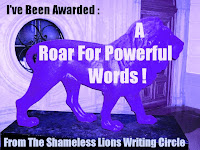 Both the Church Lady and Shauna Roberts have nominated me for A Roar for Powerful Words! and I am grateful and very much appreciative of their thoughts. This is an award hosted originally at The Shameless Lions Writing Circle, but which has spread like wild over the net. There are many lions out there now, and all are roaring.

As near as I understand, the general rules for the award are to post the Lion, which is done, and to list three essentials for powerful writing. Here are my three essentials, all of which have been discussed wonderfully by other recipients of the award as well.

1. Honesty: It seems weird to talk about honesty as a requirement in writing when many of us write “fiction.” But I do see it as essential to good writing. Honesty in writing means, among other things, not taking the easy way out when you know in your heart that your character wouldn’t act that way. An example from my own writing? In Cold in the Light I had a character utter a particular curse even though I hesitated because I knew my mom wouldn’t approve. But that character, at that time, would have used that curse. I had to let him utter it.

3. Fun: Writing is not a joy at every moment you are engaged with it. At least not in my experience. Sometimes it is downright hard and exhausting work. But if there is no fun in it then I don’t see how it can be enjoyable for the reader who reads it. I try always to keep in mind that writing is a form of play for me. It is serious play, but I’m either going to have fun or I’m going to quit.

Email ThisBlogThis!Share to TwitterShare to FacebookShare to Pinterest
Labels: Lions

I win 5 dollars on the powerball and you get an award for your words...something just doesn't seem right about it all. LOL congratulations Charles you deserve it because not only do you tell stories here you teach.

Like the three points very much. You tell it like it is and make it clear for others to understand. Well deserved. The duality of the points you made is interesting.

Congratulations--you truly deserve this!!
I agree with your three criteria. And you are right. If you're not having fun writing your words, how will a reader possibly have fun reading them? I think moods do show through in one's writing.
:-)

Charles, there is no doubt you are a true Lion.

Mark, thanks very much.

Julie, thanks. Good point about the duality of the points. I hadn't noticed so much except for the first one.

Church lady, and thanks for sending it my way. I believe that moods show through as well.

Bernita, thanks for the kind words.

And the discipline to do it every day whether you feel like it, or not. That's my big "D" problem.

Congrats on the roar.

Oh my, well done and those three criteria's? How true are they. Fun must come into it, even though at times the fun disappears when you just can't get it right.

But then I put my trust into my cast and they are truly magnificent!

Great points. One of the first things my writing mentor told me was, "Write like your momma is dead."

I've got one of these to do too, hopefully in the next few days.

You certainly set the bar high!

Ah, fun. How quickly we can forget that when it's fun -- there's almost nothing better! Great words. It's interesting that honesty is coming up a lot. It's something that you don't read a whole lot about in the books on craft, but like you, I believe it's crucial.

Yes, yes, and yes. All three points are so very true. Often times, when I think it isn't all that fun anymore, I realize writing is still 100 times more fun than anything I would ever want to do. Thanks for reminding me of that.

Congratulations on the award! It's nice to be recognized, even in the most humble of ways. Your essentials for good writing are a lot more detailed than mine were.

And thank you for your condolences at m's blog. That was very, very cool of you to say. I in turn am sorry to hear about your sister's fight with cancer--that had to be a difficult thing to witness. My aunt would probably have had a long fight, too, but she never went to the doctors and did not want to know what was wrong--not until the first stroke. She was too busy taking her friends and my grandmother to the doctor or the store, as well as minding the business of everyone else under the sun.

We write for those that are in our hearts, be they gone from the world we know, or right next to us, a breath away reading along with us.

And that was a good hint as to the particular curse that your character uttered. My mom would frown, too, I imagine.

Well done, Charles! Sometimes it CAN be hard work, and you have to keep chiseling at a piece. But when you nail it, YOU KNOW!

WEll I definitely agree that you sure do deserve this award! And I agree with Lana that you rock!

"I had a character utter a particular curse even though I hesitated because I knew my mom wouldn’t approve." My gosh, what a nice person you are! You win an award for that alone!

Having the discipline to do something every day is - well - discipline. Congratulations!

I say you win it! If you want, I'll try to intimidate your competition until they "drop out" ala Soprano style. :) Anyway, I think all your points are great ones. Honesty is tough -- my feeling is that as a writer, we're paid in large part to make ourselves look bad, tell the worst parts along with all the good ones. And the other two are mandatory, although fun isn't discussed much. So necessary! I'm going to start bringing that up in class more less they think they've entered a gulag.

Wow, congratulations! You have a wonderful way with your words. You've always been informative here, talking about great topics that writer should know.

Avery, thanks. Discipline is actually one of my strong points. To make up partially for my lack of talent.

Middle ditch, thanks for stopping by. And yes, there are times when fun is nowhere on the horizon.

Travis Erwin, that's good advice. I made a mistake once very early in my career in showing my mother a very very tame horror story I'd written. She read it, looked up with tears in her eyes, and said: "Is that what you think of me?"

Steve Malley, the bar is only high if you're a hobbit, my friend. You should be able to step right over it with no trouble.

Lisa, I picked up honest from your blog. Seemed like a good word to reuse.

Szelsofa, thanks my friend.

So many comments to respond to that I broke this into a couple of posts. If you don't see the comment to your last post, please see the one by me above.

Farrah, I know. It's why I so look forward to finishing grading final exams so I can get to writing and have some fun.

Eric1313, thanks, and thanks for stopping by the blog. I can sympathize with your aunt's "not wanting to know what was wrong." It must be very frightening.

Danette, I like it when it gets nailed. Sure with I had a better hammer.

Ello, thankee. I rock when I'm listening to Metallica at least. ;)

Josie, I even try to avoid discussion religion or politics with my mom, which doesn't necessarily make me nice but does make me wise.

Erik, man was I glad I wasn't at that meeting. Crazy stuff.

Michelle, I love your comment about the gulag. I definetely think one of our job's as a writer is to show our wounds.

Christina, thanks. I really appreciate your kind words.

Happy Holidays to you and Lana. I'm going to really try not to blog for a week (but who knows how long that will last).

I enjoy your blog immensely, and wanted to thank you for teaching in such a fun and enjoyable way!

Just wanted to stop by and say Merry Christmas!

Church lady, I'm probably going to cut back myself. Today's post will probably be my last big one for a few days. I hope your break is an enjoyable one.

Danette, and to you as well. Partee.

Sid, you two have a great Christmas.