I don’t know if many of you know who Karl Edward Wagner was. He died in October of 1994. He was an extraordinary writer, and a wonderful editor who helped many a younger writer. He wrote both fantasy and horror, and I enjoyed both, although I will remember him best for his fantasy tales of Kane, swordsman and sorcerer. I happened to be looking through some old stuff today and found a comment about Karl’s death that I’d written to the REHupa group. It’s a dreary day here, and I’m feeling a bit melancholy anyway. It seemed like the right time to share it. 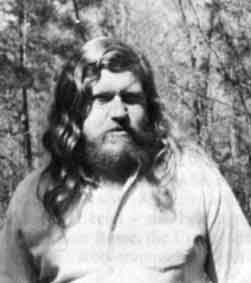 I got a call earlier this night from Morgan Holmes to let me know that Karl Wagner had died on Saturday past.  I understand that he was in his mid-forties and that's way too young for anyone to go.  But I also understand that he rode hard all the way through and did some things to his body that weren't exactly healthy.  It was his choice.  I believe that.  Despite all my training in the psychologies of environmental and biological determinism, I believe that most adult human beings have the brain power to make choices.  Maybe I just have to believe that.

I talked to Karl Wagner twice in person, both times at the New Orleans Science Fiction and Fantasy convention.  I wrote him a couple of times and got one longish letter back.  I asked him when he'd be coming out with another Kane collection, which was surely one of the more common questions he got asked.  Now I guess I have my answer.

Kane was a unique character in heroic fantasy.  I thought he was the most original conception in heroic fantasy, ever.  And Karl's prose was the closest that I've seen to Robert E. Howard's in its ability to create feelings of passion and glory, and to give the impression of myth.  I wish Karl had written more, but then I always wish that of any writer I like.  He had his own needs.  And it wasn't my life to live.  Now it isn't his either.  But I won't forget, and I know many others who feel the same way.   Goodbye Karl.
----
----

Posted by Charles Gramlich at 6:04 PM

I met him briefly at a World Fantasy Con in Ft. Worth. 1979, I think. He signed a copy of his current collection, NIGHT WINDS, for me. Some good stuff in that one.

He was crazy funny as well as being a great writer. It's very sad that he passed away so young. "Sticks" is a great story, and every reader of horror should seek it out.

Bill, that's my favorite by him, in fantasy. In a lonely place is a great collection of his horror.

Good use of a melancholy day (here too :-)

I had heard the name, but I never knew the man and, unfortunately, never read much of his own writing until after his passing, though I had read some of the collections he edited.

When I did finally get around to reading the Kane stories, I was blown away. I'd have to say Wagner and the Kane character have had a huge influence upon my thinking and to some extent my plotting since the late 1990s, at least in my works of dark fantasy that combine with horror elements.

I've read all his Kane material I've been able to get my hands on, which to my knowledge is everything except one novel. I'm always perusing used book stores for that novel. Yes, I could order a copy online, but that doesn't feel the same for some reason. The search is the thing, like I'm on my own personal quest.

I wish more readers knew about Wagner and the influence he had. I feel he is sort of like my own generation's Howard, having died much too soon with much potential gone. It would be interesting to see what Wagner had to say about today's modern publishing world, what he would make of it, how he would make use of it.

Cloudia, seems that kind of day.

Ty, I think he was a lot like Howard in many ways. He was certainly a big fan of Howard's and edited some of his stuff for Berkley. He even wrote two Howard pastiches, Conan: The Road of Kings, and Legion from the Shadows, a Bran Mak Morn tale. Definitely a helluva writer.

Absolutely one of my favorite writers, it astounds me that his stuff isn't more widely recognized and available.

I'd sure like to hear if there were any particular gems in that letter he sent you Charles.

I had heard the name, but never read any of his writings, i fear :(

David J., I'll have to dig that out and see if I can scan it.

I would very much appreciate that Charles.

Hadn't heard about him, but I'm sorry he died so young like the old saying "The good die young."

Feeling melancholy too.
I will be in New Orleans a week from Thursday but not at a conference like this one unfortunately. That would be much more fun.

It's a very good tribute. When ever I read the word melancholy I think of Ray Bradbury's 'Dandelion Wine'.

I haven't heard of him before. He sounds like an amazing writer--great tribute.

Good words, Charles.
I'll try to read some of his work.

Nice tribute. I need to learn more about the folks in these genres.

Patti, tis the season, I guess.

Bernard, yes, I can see that. Good book.

Golden Eagle, he was indeed.

Vesper, you might try "In a Lonely Place." Some great stories there. Horror but still written with great heart.

Sage, he was a biggie in Fantasy for sure.

I've not yet read all his work, but as far as I've been able to determine, I've got all his fiction. "Sticks", and "Where the Summer Ends" are outstanding horror stories. Kane is fantastic. I'm glad I got the Nightshade Editions when I did, since they're OOP and from what I understand, the secondary copies are expensive.

I passed on the recent two volume collection because I have everything in it, but I encourage those who don't have it to get a copy.

His annual horror anthology for DAW was a major influence on me when I was in high school.

I don't know Mr Wagner's work. That was quite an impressive summary of your feelings about his writing.

i read some of his stuff [not much available], and enjoyed all

I only know him from reading . I am having one of those days today. HUGZ

Charles, a salutory post to one who should be remembered. Your humanity and insight are present,
as always.

I agree; you can't down a guy for his choices. I've got some to pay for,too, I suspect.
I also agree with your evaluation of Kane as the greatest conception for an s&s character.
Too bad there'll be no more.

Never knew of Mr. Wagner until now, but that's one of the neato keen things about this here Interweb. Folks potentially forgotten can be remembered and appreciated. Thanks for the introduction, Charles!

I like what you say about choices. I've had to come to that place with others and bless them on their journey.

Well, I'm hardly Karl Wagner, but I do share with him, I think, the tendency to use my body as a theme park-- and wake up one morning surprised.
If I knew I was going to last this long, I may have opted for an Ashram or something.

Charles, that's a fine tribute to Karl Edward Wagner. I'd never heard of this amazing writer. Many thanks...

Keith, A couple of my friends made it into his DAW anthologies. I always wanted to get to the point where I could get something considered by him, but he had gone by the time my writing began to develop. “Sticks” is indeed a great story.

Travis Cody, He was an amazing talent.

laughingwolf, I know, his stuff should be much more widely available.

Drizel, hope your days get better!

Richard Godwin, thanks. I appreciate that, man.

A.Decker, I think it would be much harder for any other writer to write Kane even that it is for them to write Conan. Thanks for dropping by.

Erik Donald France, I appreciate that.

Richard Prosch, well worth checking out. I think you’d like his work.

Dayana Stockdale, the only thing we can own is our own lives, and others will fight us over those.

ivan, I used to do that, but a few years back my body just rebelled and said “eff you.”

Prashant C. Trikannad, he’s well worth seeking out. A great writer in both fantasy and horror.

Excellent tribute. It's hard to watch people go the rough road. His characters live on. And maybe new names will come along and fill the void. But the loss of the one, the person, that still takes a toll on those who knew him and his work.

eric1313, it shows how each person is unique, and no one is completely replacable.

RIP Karl. Thanks for introducing us to him, Charles.