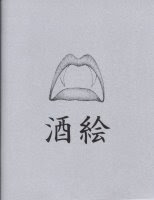 Here are the covers for the two editions of Wanting the Mouth of a Lover. The chapbook is now for sale at Spec House of Poetry.

Just to mention a little about the genesis of these poems. I was introduced to Haiku in 1991 by David Lanoue, an English prof and friend of mine at Xavier University. David referred to them, memorably, as "one breath poems." That is, a poem that could be said essentially in one breath. Since I was writing quite a bit of horror fiction at the time, including working on Cold in the Light, I started--naturally it seemed to me--to think about horror haiku, and I wrote some Warkind ku just for play and to try and get a handle on the form. Then, it occurred to me that if a haiku was a "one breath poem," why not a "last breath?" That's when I started writing the vampire haiku. Rouge et Noir published some of these and they were well received, but for various reasons I didn't pursue the idea any further. When I started talking to J. Bruce Fuller about chapbook ideas, I mentioned the vampire stuff and he told me to send it to him. So, if you like them, I take full credit. If you don't, it was all J's idea.

In other news, I was grateful, and honored, to learn that my flash fiction piece, "Precious Cargo," won the "Reader's Choice" award in Jason Evans' The Clarity of Night contest. Thanks to all of you who voted for me. I really appreciate that.

And now to end on a light note, here's a picture Lana took of our poetry panel at Babel Con. That's J. Bruce Fuller there with me. Yes, he does look a little bit like Mephistopheles, but he's a much nicer fellow than I am. My pic came out with a bit of "red eye" and Lana fixed all that up. Ain't I purty?

Posted by Charles Gramlich at 1:17 AM

It's nice to know that two of my five picks made the grade. Congrats on your "Reader's Choice" Award.

I like the way each word MUST connect with the preceding and following word to make the the construct. Wonderful writing.

Good for you and the readers choice thing, Glad you told us of that contest, It was an interesting exercise.

Ah, I don't think I know any nicer people than you Charles. Come on. You're just being modest.

Aiee! Those eyes! Vohanna is alive and well and reading poetry in Louisiana!

again, grats on all fronts....

You've been working on that hair for quite some time, haven't you ?

Weren't you in Saxon, or was it Uriah Heep?

Seriously though, I am quite sure Heff is gazing upon this pic with great envy, passionately admiring your flowing lockage!

Congratulations, Charles!! Yay! I'll have to check out your chapbook as well. :-) Of course you look purty. :-)

JR, thanks. It's a nice feeling.

Mark, he apparently runs 'em fairly often so it might be worth checking out. Thanks. Nicely said about poetry.

Sidney, you poor dear man. You, too, have failed to recognize my evil.

Jon, oh ho, now that you've recognized me I'll have to send some mutants your way. I thought I was too recognizable as a beautiful young woman so I chose the middle-aged long haired male you see here. But the eyes, the eyes! (Lol, I never thought of that. Good catch).

Laughingwolf, Alice is cousin twice removed or something like that.

Heff, I'm not sure how long it's been growing without a cut. Pretty good while, but I think it may have reached it's peak, or valley as the case may be.

Wil, the Saxon boys were pretty ugly so I think I'd definitely fit in with them.

Demon hunter, thanks. LOL. With those eyes I look like the demon's your name says you hunt.

~beams at Charles~
~beams at Lana for the cover~

congrats on the reader's choice award. do you still have those Warkind haiku? you should post them.

i ordered my copy of the book last night, now i'm just waiting to get it.

dang, i've only been removed the one time... alice still rocks! :P lol

Charles, I of course did not mean that in a bad way I was just trying to come up with a couple of obscure bands that only men such as we would know!

I love the idea of a haiku being a "one breath" poem. I've never heard it expressed that way. Even better, the way you took it to "last breath". Congrats on the reader's choice award :)

Bernita, you make me smile.

Greg Schwartz, I don't think I still have those Warkind ku. That's probably a good thing. Hope you enjoy the collection.

Laughingwolf, Yes he does. Amazing. He's really getting up there now.

L.A. Mitchell, thankee. I have to admit, I thought the "last breath" thing was kind of catchy. I patted myself on the back.

The Reader's Choice award is the one that counts, my friend. Nice one. :)

Readers know a good thing when they read it! All hope is not lost ;).

Congrats, hon, on the book and the award both. :D

I hear that word haiku and my mind goes out of control. But it's just what I call "sit-haiku", which is another way of saying sit-com silly stuff that wouldn't pass muster as good examples of the form.

But they are fun to do.

Wonderful news all around. Aren't weeks like this one great? Congrats on everything.

Bernardl, thanks. Yes it's very nice to get the reader's approval.

Anndi, lol. Dashing? LOL. But thanks.

Travis, haiku is a fun form to play around with. I'm not even sure what is good or bad form sometimes with haiku. It's in the joy of the poem.

Shauna, yes, and to be savored. They come too seldom.

Awesome, man. Major five fold congrats! All in one breath, too ;->

Charles, congrats on the publication of "Wanting the Mouth of a Lover" and for the flash fiction award. I linked up the info to both to your comment at "Issa's Untidy Hut."

I also heartily concur with Daniel Lanoue's one breath idea. I read somewhere that the approximate time it takes to speak a 17 syllable English haiku is the duration of an in-breath and an out-breath. Since there is no real correlation of 17 syllables to the original Japanese form, the single-breath theory, linked as it is to meditation, makes the most sense and obviates any language barriers.

Interesting doodle. BTW: What do you ride?

Issa's Untidy Don, thanks, and thanks for the linking. I agreed immediately with the "one breath" idea. It made such intuitive sense, and the counting syllables just didn't seem to capture the flavor of the Japanese originals.

Rick, the bike in the picture is a Honda Magna, which I've had three of. At the moment I'm on 4 wheels because I got hit on all three, totalling the bikes and nearly totalling me the last time. I'm looking for a bike but haven't gotten one yet, and Lana is not eager for me to do so. What are you riding?

Congratulations, Charles! I'm purchasing a copy this weekend so I'll have something intriguing to read during my trip to Seattle.

Is there any chance you're coming to Conclave in October 33 in October? It's being held right next to Detroit Metropolitan airport.

Congrats all around, Charles! And I love the pic.

I'm really taken by your interpretation of haiku as "last breath" poems. Adds an extra dimension to such a slight medium. I will have to check them out...

Excellent! I'm psyched to read some vampire haiku. "Last breath poetry." Genius. And congratulations on the flash fic. contest. And kudos to Lana for beautiful cover work. All very exciting!

And yes, you are one purty man.

Vwriter, I hope you enjoy the book. I'm afraid I won't be going anywhere in October. School is back in session at the end of August and that usually keeps me from making the circuit. Hope you have fun, though.

Sarah Hina, thanks. I appreciate that. I'm energised to write some more last breath poems. Going to do some this evening.

Sarai, thanks. Yes, it was very cool.

Avery, Lana and I are going out tonight to celebrate. It was a good weekend fer sure. But I think you need glasses.

SQT, yes, they capture the simple but elegant style that haiku should be.

Laughingwolf, I still listen to "the Black Widow" all the time.

Good for you, Charles -- great news. I like the idea of haiku as one-breath poetry, and the idea of horror haiku is fascinating.

Charles, Congrats on all the recent acceptances, the award, and on your presentation. Do you ever get nervous presenting?

Mary Witzl, yes, the one-breath idea really brought it home for me.

Danette, I do get nervous presenting, mainly because it's a very different audience then I have when I teach. My nerves usually go away pretty quickly after I start talking, though.

I actually have glasses, Charles. But, that's not the point. I think you're cute. Lana agrees.

OMG, the red-eye picture! I almost peed myself again!